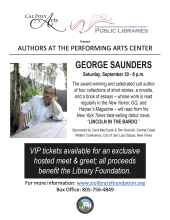 The award winning and celebrated cult author of four collections of short stories, a novella, and a book of essays will read from his New York Times best-selling debut novel, "Lincoln In The Bardo." 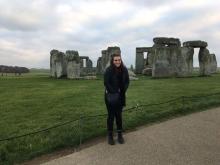 Congratulations to senior English major Malama Wilson for placing third on the Collegiate Learning Assessment Plus exam this spring!

This national exam assesses seniors on their critical thinking and written communication skills. Malama's score placed her within the 99th percentile of seniors from 157 institutions nationwide, and was the third-highest score of the 200 Cal Poly seniors who participated. Her accomplishment comes with a $100 award.

Congratulations to English Majors Margaret Foss and Ashlynn Ritter!
The English Department is pleased to announce that Margaret Foss and Ashlynn Ritter were chosen as this year’s recipients of the Dorothy Cooper Memorial Scholarship.
Continue reading The Dorothy Cooper Memorial Scholarship Announces Its Winners!... 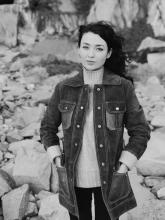 English graduate student, Marissa Ahmadkhani won Cal Poly’s Academy of American Poets Contest for her poem “Only Half,” which investigates her Iranian heritage. She will receive a $100 award from the Academy. 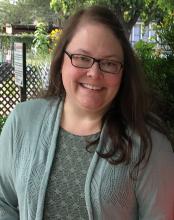 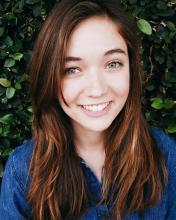 The English department is pleased to announce that Rebecca Gates was chosen as the winner of the department's American Scholar Prize. She will be presented with her award at the English Department Commencement Ceremony on Saturday, June 17.

An Afternoon With Author T.C. Boyle

The PEN/Faulkner Award-winning novelist and “short-storyista” will discuss his extensive career and the immense joy he finds while creating his work. The author will then perform a new story… which will remind us all  of the elemental pleasure of hearing a single voice in a darkened auditorium, taking us to new places.
Continue reading An Afternoon With Author T.C. Boyle...

Cal Poly's English Department has announced that the 2017 Academy of American Poets contest is now open. All registered Cal Poly students are eligible to enter.

The winning poet will receive a $100 first prize and a chance to win the $1,000 Aliki Perroti and Seth Frank Most Promising Young Poet Award. The judge will also select an honorable mention. 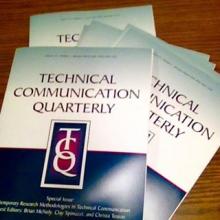 Congratulations to Chelsea Redeker Milbourne, whose recent article in Technical Communication Quarterly was chosen by NCTE as 2016's Best Article Reporting Historical Research or Textual Studies in Technical or Scientific Communication! For a limited time, the publisher is providing free access to this excellent article--read it today!