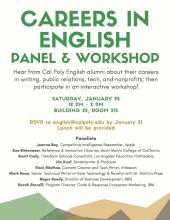 Hear from Cal Poly English alumni about their careers in writing, public relations, tech, and nonprofits; then participate in an interactive workshop!

RSVP to english@calpoly.edu by January 21
Lunch will be provided
Continue reading Careers In English ...

The American Scholar Award was established by former English professor and dean Linda Halisky to recognize an English major who is "lit up" by literature. Juan's winning entry described how Gloria Andaldúa's "Speaking in Tongues: A Letter to Third World Women Writers" helped him become comfortable with representing his own thoughts and selfhood freely; he describes her essay as "picking a bone in my body and riling me up." 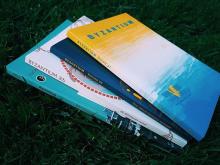 Second Place: “My Life at the Mercy of an Other” by Wylie Hughs

All winners will be awarded a cash prize, and their work will be published in the 2019 issue of Byzantium, Cal Poly’s annual literary journal. Please join us for the unveiling in June to get a copy and to hear the authors and other contributors read from the issue. Details to be announced soon. 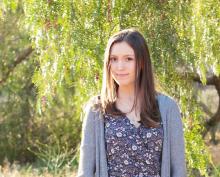 English major Katherine Flitsch (San Luis Obispo, CA) has just won Cal Poly’s Academy of American Poets Contest for her poem “Howl for the Piedly Pious,” which investigates faith in 21st-century America through a poem inspired by Allen Ginsberg’s “Howl.” She will receive a $100 award from the Academy. Her poem will also be considered for the $1,000 Aliki Perroti and Seth Frank Most Promising Young Poet Award.

Judging this year’s contest, poet Rebecaa Morgan Frank said, “‘Howl for the Piedly Pious’ pays homage to Ginsberg in its lines and rhythms but shapes its own significance as an exploration of faith in the 21st century, digging into the realities of examining faith while living as a human in this world, streaming services and all. A standout in sound and sense– the poem builds complexity of thought through song.”

First honorable mention goes to English major Kavya Makam for “Men of Andhra Pradesh,” a poem that is forthcoming in the 2019 edition of Byzantium, Cal Poly’s award-winning literary journal. Frank was taken by the poem’s “distinctive voice and its fine manipulation of syntax, with its author’s control of command and question used to keep the poem’s tone complex as the poem develops. The poet deftly guides us through an imagined world of reversal of gender norms and restrictions.”

Second honorable mention goes to English major Vanya Truong for her poem “my hands take things apart.” “I returned to this poem again and again,” Frank said, “in appreciation of the control of the lines, the way they gradually roll out that masterful simile as it evolves into the larger conceit of the poem, one which reflects the central emotion and action. A beautifully-crafted poem.”

Rebecca Morgan Frank is the author of three collections, most recently Sometimes We’re All Living in a Foreign Country. Her poems have appeared in The New Yorker, American Poetry Review, Ploughshares, Guernica, Orion, and elsewhere. She is co-founder and editor of the literary magazine Memorious, and she is the Spring 2019 Distinguished Visiting Writer at Bowling Green State University. 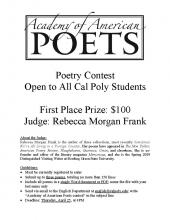 The Academy of American Poets contest is open to all Cal Poly students! The first place prize is $100. Apply by Thursday, April 25th, at 4 p.m.

Must be registered currently to enter.

Submit up to three poems, totaling no more than 150 lines.

Include all poems in a single Word document or PDF; name the file with your last name only.

Send via email to the English Department at english@calpoly.edu; write “Academy of American Poets contest” in the subject line. 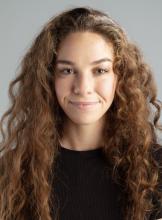 Cal Poly Senior, Amelia Meyerhoff created "The Clapback" to spark a movement that will promote empathy for victims of sexual violence, provide survivors a validating platform to voice their experiences, foster a community of survivors, and raise awareness about the prevalence of sexual assault and rape on college campuses.

Lichtman was born in Stockholm and raised in California. His work has appeared in American Short Fiction, Los Angeles Review of Books, Oxford American, The Sun, Sydsvenskan, and elsewhere. He lives in Portland and Ukraine. 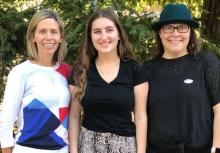 Established in 2018, the Mary Catherine Reedy Scholarship is named for the mother of Cal Poly English major alumnus Roger Reedy ('88).

The award was created in honor of her memory. "She was a very special individual. She believed in helping others - volunteering her time to great causes throughout her life. She was an avid reader - inspiring all of her eight children to read books from an early age. She was always putting others first, being kind to everyone she met, caring about the world around her, and always trying to make a positive difference." 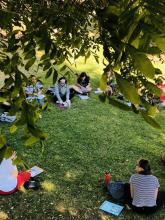 The Department of English at California Polytechnic State University, San Luis Obispo is thrilled to announce the launch of its new Blended BA + MA degree program. This unique new program — the only one of its kind with the CSU system — offers driven, passionate, and high-achieving students the opportunity to complete their Bachelors and Masters in English in an accelerated, five-year time frame. Majors in good academic standing (3.5 major / 3.25 cumulative GPA) can apply to the program as sophomores or juniors. Those admitted to the program will transition from Bachelors to Masters standing and begin taking graduate seminars in their fourth year, and receive both degrees at the culmination of their five-year experience. Students in the blended program complete a senior project and an MA “capstone” portfolio project.

There are many excellent reasons to consider applying to our new blended program — not least the fact that it gives our very best majors the opportunity to earn a graduate degree in half the time and at half the cost of our traditional two-year M.A. Moreover, for those looking to pursue careers in secondary or post-secondary education, technical and professional writing, publishing, and editing, an M.A. in English considerably expands and deepens students’ knowledge and skill sets, making them competitive on a broad range of job markets. It is also an excellent option for students considering, though not yet fully committed to, applying to PhD programs after graduating from Cal Poly. Beyond all these particular reasons (and there are indeed many more), our new blended program was designed for those students who love learning about literature and language so much that they want to read more, learn more, and accomplish more than a traditional BA program permits.

Any and all questions about the blended program can be addressed to Ryan Hatch, Director of Graduate Studies in English, at rahatch@calpoly.edu. 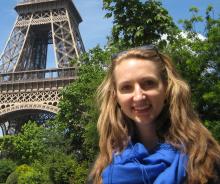 Dr. Chelsea Milbourne, Assistant Professor with the English Department and Director of the Technical and Professional Communication certificate program, was awarded a fellowship for the 2018-19 academic year through the American Council of Learned Societies (ACLS). This fellowship will allow her to further her research next year and complete her current book project called The Utility of Wonder: Spectacle, Gender, and Public Science Rhetoric in 18th Century Great Britain.

As recent recipients of the the Technical and Professional Communication Certificate, English students Han Choi and Rebecca Gates were excited to sit down with Milbourne to hear more about the wonderful opportunity and her interesting field of study.